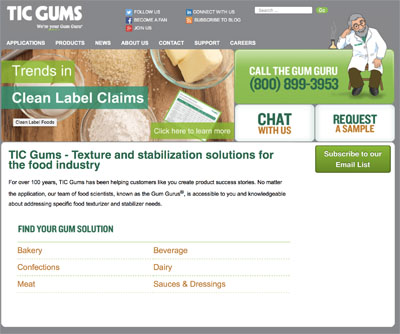 Hydrocolloids are essential ingredients as they provide texture and stability in food and beverage applications. However, powdered gums can create several challenges during processing including slow dispersion, increased dusting and delayed hydration.

Although manufacturers have relied on dry blending and oil slurries to alleviate these issues, many are finding themselves reworking the batches and lengthening their production schedules.

Agglomeration has since emerged as a leading innovation, allowing manufacturers to address these concerns and achieve proper dispersion and hydration.

Through this method, the gum is prehydrated under controlled agitation and is dried prior to the final mixing of ingredients. Agglomeration greatly improves dispersion, speeds up hydration and shortens the overall manufacturing process.

The Basics of Food Gums video series provides an introduction to food gums and explains what these ingredients are, where they originate and why they are used.

The Agglomerated Gums episode is the start of a new expansion series, focusing on specific innovations within the hydrocolloid industry and their impact on food product development. Each episode will dive into a different innovation category and offer food and beverage industry professionals a new perspective into the world of food science.