Making a difference with organic astaxanthin

AlgaeHealth is a subsidiary of BGG, formed in 2016 to focus exclusively on the research and production of efficacious ingredients from natural algae. The company claims to have the world’s second largest astaxanthin farm with plans in place to become the biggest by the end of 2017.

What’s more, says Bob Capelli, Executive Vice President Global Marketing: “Our company is the first organically certified astaxanthin farm in the world. We have some proprietary technology that’s very innovative, that our technical staff spent a long time studying and trying to figure out exactly how to achieve this … and now we can claim to be certified organic.”

Frankly, he admits: “We may not be the first people to produce astaxanthin — we’ve been doing it since 2006 — starting at a small scale and progressing to large-scale production in 2013. Indeed, there are some companies out there that have been producing astaxanthin for 5–6 years longer than us, but we have such great technology that we were the first to figure out how to do it organically. In addition, we’ve been able to attain the purest product — 97% pure astaxanthin in our algae biomass — the industry’s best. Eight years of intense R&D has really paid off for us.”

Organic certification is a key differentiator for Algae Health Sciences: “Although we realise that this isn’t going to be the be all and end all for every company on the market, there are certain brands that gravitate towards organic products. The organic certification is valid in the United States at the moment. What we’re trying to do is extend that validation to Europe and we believe that that’s going to be done in the next 3-6 months,” enthuses Bob.

At the very heart of astaxanthin’s benefits are its foundational properties of being the world’s strongest and highest quality natural antioxidant, and being a safe and natural, broad spectrum anti-inflammatory. As a result of these attributes, astaxanthin has demonstrated the ability to protect our cells and the DNA within our cells from the onslaughts of oxidation and inflammation. In fact, these properties are the primary mechanisms of action from which most of astaxanthin’s varied health benefits emanate.

“When ingested, Astaxanthin has been documented to become distributed throughout our entire bodies — into our brain and eyes, our muscles and skin, our heart and other internal organs — and just as astaxanthin protects the algae cells, it also protects all the cells in our bodies,” says Bob. “It’s a flexible and diverse product with multiple applications, and brands that want a novel, innovative difference to give them a head start on their competitors now have access to organically certified astaxanthin, which should fall under the organic auspices of the EU very soon.” 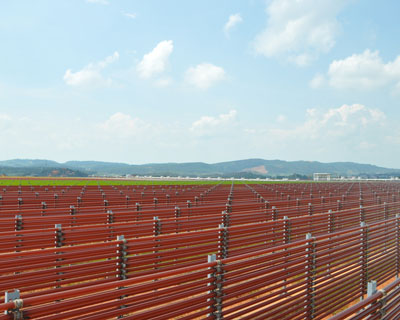 When asked what the certification means for AstaZine, Bob reiterates that the company sees itself as an innovator. “If you’re not the first, then you have to do something different. We’re doing some things that will help to distinguish ourselves from other suppliers; the organic claim is one of the primary achievements but, in addition to that, we’ve figured out how to produce greater yields of astaxanthin from our microalgae. Other manufacturers can only get an astaxanthin content of 2–6% from their algae; we’ve been able — through some pretty innovative technological developments — to increase that yield to 6–8%.”

The material is available in many forms, such as oil, powder, water-dispersible powder and microencapsulated beadlets. The company also produces softgel capsules and private label bottles for distribution in select markets around the world. In addition, Bob adds: “It’s important for us to be doing something unique, to differentiate ourselves and give the industry a good reason to buy from us.”

Discussing end-user or consumer benefits of the organic certification, Bob explains that, within the USA, for example, the concept of “organic” has a huge following. And, in many countries in Europe, there’s a definite and growing demand for organic products. “In the EU, 10–20% of consumers really gravitate towards organic offerings and, in addition to that demographic, many people are now, more than ever, willing to give organic a try. They may not be actively looking for organic products during their weekly shop, but if they have an opportunity to buy an organic product at a comparable price to a non-organic one, they tend to favour the certified option,” notes Bob.

This is something that’s going to offer a significant differentiator for any brand out there. You might not be the first company to offer an astaxanthin-containing product in your country, but you can certainly be one of the first to supply organic astaxanthin.

“The main driver for astaxanthin is that, when people try it, they feel it working in their bodies,” says Bob. “There’s a school of thought that suggests that 90% of supplements are taking with the belief or faith that they’re actually doing something. You take your multivitamins and you believe that they’ll keep you healthy, maybe prevent a disease state or help you to live longer. But when you take astaxanthin, most people find that they can actually feel a difference: they can get a better workout, they have improved endurance and, I’ve been told, regular users can even see better.”

A lot of clinical research has been done on eye health benefits and, as you become middle-aged and start to experience more aches and pains, astaxanthin can really help with that. Astaxanthin’s multi-pronged approach of neutralising oxidation, reducing inflammation, preventing DNA damage and protecting the mitochondria means that natural astaxanthin can help to combat many of the problems associated with ageing. Plus, you can stay out in the sun longer without getting burned. There are numerous effects that you can actually feel as astaxanthin protects the cells in your body.

In conclusion, Bob notes: “You never find a better advocate for your product than someone who’s used it for a month, felt a difference and then goes out and tells their friends and family! We’re getting huge word of mouth promotion. There are a lot of new players in the astaxanthin market, which is generating a great deal of publicity, and I can see this being one of the major growth products in the European nutraceutical industry for many years to come.