Consumers are more aware than ever that having a powerful immune system is key to stay healthy. In this immunity market, probiotics are among the main ingredients. The probiotic yeast Saccharomyces boulardii, Lynside® PRO SCB, is well known to support gut heath. But did you know that it may play a role on microbiota where 70% to 80% of immune cells are located? 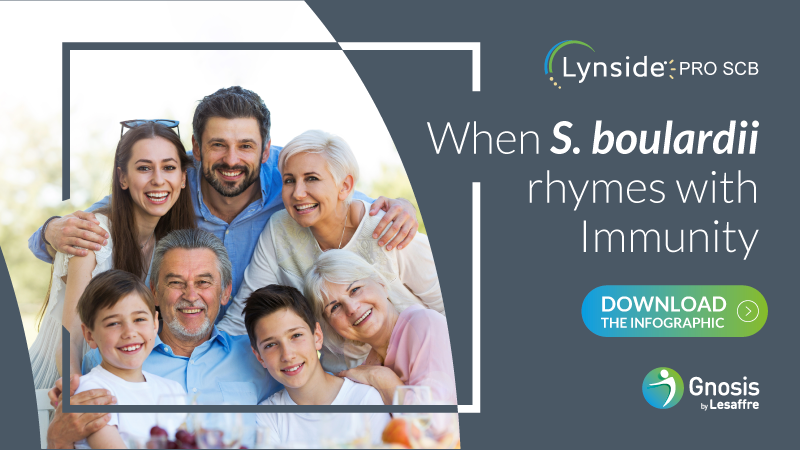 The probiotic Saccharomyces boulardii, Lynside® PRO SCB is well known to support gut heath. But did you know that it plays a role on microbiota? As microbiota may help to maintain a healthy immune system or fight against pathogens, it’s important to understand several mechanisms of action within the gut which are involved in the immune response.

“The place to be” to interact with the Immune system

With 70% to 80% of immune cells localized in the gut, the intricate interplay between the gut microbiota and the local mucosal immune system is increasingly recognized to also affect systemic immunity; for years, microbiota-directed interventions have been investigated for their potential beneficial effect on the immune system.

Lots of interaction between S. boulardii and Immune System

Saccharomyces boulardii, one of the most documented probiotics, interacts within the gut microbiota; S. boulardii is studied for its different roles through direct or indirect interactions in the immune response; according to clinical studies or in-vitro studies, it has been shown that the probiotic yeast may play an important role in the induction of IgA and cytokines, immune cells maturation, anti-inflammatory effects or binding pathogens.

To go deeper in the relation between S.boulardii and immunity and define all opportunities with Lynside® PRO SCB, discover the new infographic “The effects of Saccharomyces boulardii on immunity” click here.