Nexira’s discussions with the FDA were at the forefront of the process, helping bring together other manufacturers to provide evidence for the beneficial effects of the fibre 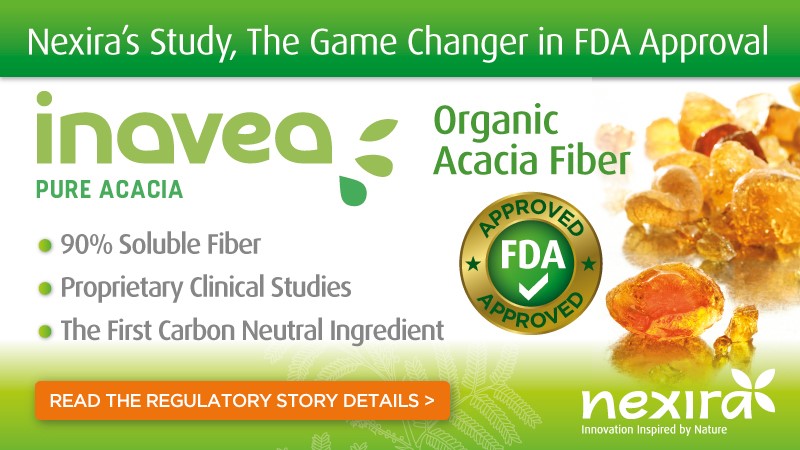 With more than 125 years as a family-owned company, the world leader in acacia gum Nexira started an enthusiastic campaign five years ago endorsing dietary fibre status for gum acacia, and they are pleased with the positive outcome! Read all the story details through the interview with Olivier Bove, Nexira Regulatory Affairs Manager.

What was the starting point?

On May 2016, FDA published final rules to implement changes to the nutrition and dietary supplement labeling and serving size regulations (including “dietary fibre” new definition). These new rules were impacting and questioning the dietary fibre status of acacia.

When and how Nexira was involved in the dossier?

Since May 2016 and the new labeling rules, Nexira was at the forefront of the discussions with FDA, successively inviting other manufacturers around the table. We were a real catalyst in this action! Inviting TIC Gums on October 2016, Kerry and ISC were added early 2017 and Alland & Robert was the last one to be incorporated in the group on 2018.

What was the FDA request?

Based on several discussions with FDA, the objective was to strengthen the body of evidence supporting the beneficial physiological effects of acacia gum on blood insulin and glucose attenuation.

How many studies were conducted?

At the end of 2018, 2 clinical studies were launched, financially supported by the Acacia Gum Group: one coordinated by Nexira at the University of Minnesota, under the supervision of Pr Joanne Slavin and another one at GI Labs, coordinated by Ingredion/TIC Gums. A Citizen Petition was submitted based on this new clinical evidence.

As we wanted to anticipate and to have a strong dossier, Nexira decided to conduct an additional new clinical study with Analyze & Realize under the supervision of Pr Uebelhack: “effect of gum acacia on post prandial glucose and insulin levels in healthy subjects”.

What was the FDA feedback?

Read all the story details through the interview with Olivier Bove, Nexira Regulatory Affairs Manager.