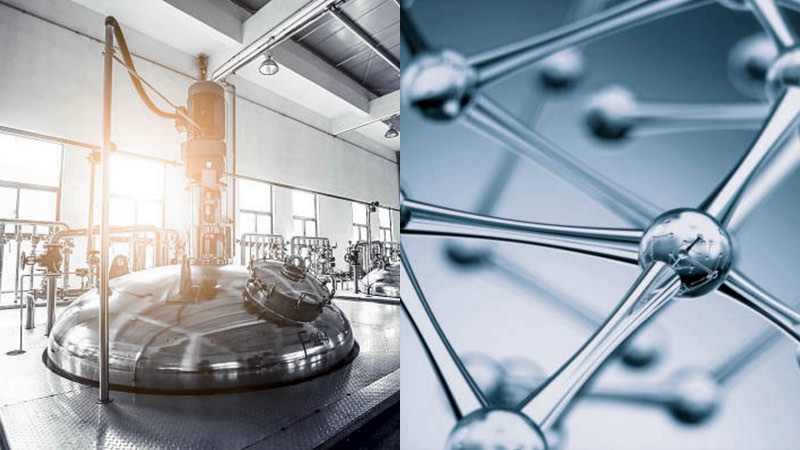 There are two main processes used to produce vitamin K2: organic synthesis and fermentation. Although the organic synthesis method has been in commercial use for several years, manufacturing has historically centred on the more traditional fermentation-derived process. Nutraceutical Business Review reached out to many of the major players in the industry to get their thoughts on the benefits and drawbacks of each method.

Kappa Biosciences' Director of Marketing, Jim Beakey, explained that outside of the synthesis vs fermentation argument, there is a larger issue. "There is a misconception about using fermentation to produce a 'natural' MK-7 product," he said. "Yes, it's an industrial process that involves chemicals and solvents, but that's not a criticism; it's an observation that the process is not equivalent to the fermentation that occurs in nature."

Beakey added that both synthesis and fermentation can create a nature-identical MK-7 molecule; in fact, Kappa has published studies that show the bioequivalence of MK-7 produced by both methods. He also pointed out that both are artificial manufacturing methods. "These types of processes make the mass-commercialisation of MK-7 possible, as they do for almost every other vitamin."

Aside from the natural debate, there are two main issues that industry experts seemed to focus on: supply chain and purity. Both can have a significant impact on the success of the final product that the ingredient is used in, so any differences may hold sway over a supplier production method decision.

Supply chain reliability is a key consideration when producing any ingredient. Suppliers do not want there to be any hold up to delivery to the client. When it comes to K2, the manufacturing methods have clear points of differentiation.

Trygve Bergeland, VP of Science & Product Development for Kappa Bioscience, said: "Synthetic production provides supply chain benefits compared with batch-fermentation." The benefits provided by organic synthesis may have played a part in the rise in its popularity a few years ago. At the time, fermentation was the only route to vitamin K2 MK7 production and the new process was fully scalable and more cost-effective.

According to Beakey, supply chain security is one of the major factors that will differentiate suppliers of MK-7 in the near future. NattoPharma's Senior VP, Chris Speed, a dietician and nutritional scientist, also supported these supply chain benefits: "Organic synthesis does enable a more consistent product composition compared with fermentation-derived vitamin K2, which often contains natural by-products of varying quantity and identity."

Speed's point infers that with a more reliable product composition, the supply chain is cheaper. This would mean that the higher the purity, the more efficient the supply chain, benefitting both supplier and consumer.

The importance of purity to the supply is rooted in cost, Speed said: "MenaQ7 products derived from either synthesis or fermentation undergo additional concentration and purification steps to produce an active functional ingredient, which costs time and money." If you don't have to run subsequent purification steps, the production process will be cheaper and have a domino effect on cost and profit across the industry.

Despite the importance of the matter, opinions on purity by manufacturing method appear to be less clear cut than those on the supply chain. Bergeland explained that for industry customers who buy synthetic vitamin K2, the key point to consider is this: the product must comprise the identical molecule found in nature to ensure specificity as a co-factor for vitamin K-dependent enzyme activation.

The fermentation method can often cause natural by-product impurities, which Kappa scientific consultant and K2 author, Mona Moller, said can be, among other things, traces of MK-6. Contrary to common opinion, impurities are not just toxic substances that can cause issues in the consumer. MK-6 impurity can have subsequent effects on efficacy and cost of production; as such, it should be reliably known and steps should be taken to prevent or remove it. Bergeland explained how this non-toxic impurity can be a downside, stating: "Studies on uptake, bioavailability and half-life clearly demonstrate MK-7's superiority compared with other MK forms. Commercially speaking, MK-7 is the only K2 approved for use by EFSA." This means MK-6 is less desirable than MK-7, so can be considered an impurity.

The higher the purity, the more efficient the supply chain

Moller agreed with Bergeland: "MK-7 from organic synthesis is in the natural form found in nature and is pure (in crystals). A fermented product does not have this purity." Furthering Moller's reasoning, Bergeland said: "The purity achieved [with organic synthesis] supports the leading microencapsulation solution and also provides application possibilities in OTC and pharma."

Unlike with supply chain, there are differing opinions on this topic. By contrast, Synergia Life Sciences said that organic synthesis does not come without compromise: "It presents challenges in terms of isomerism and potential hazards in the form of unidentified ppm-level impurities." The Viridis group company explained that this means that organically synthesised MK-7 calls for greater FDA intervention and requires a drug-like approach to production. This would add steps to the production process, and as discussed, would add a subsequent cost.

Industry opinion seems to lean toward organic synthesis, but not without some valid significant push back. Beakey brought up an interesting point with regard to this argument. He said that the question of method is not as relevant today as it was two years ago. "There are now multiple companies that produce MK-7 by synthesis, fermentation or both. Today, the market seems to be divided between high-quality manufacturers using either production method, and those that don't supply a quality ingredient," he explained.

Industry opinion seems to lean toward organic synthesis, but not without some valid significant push back.

Kappa recently published a nine-year study that addresses this issue. Beakey concluded his thoughts, saying: "The differences between high-quality vendors are, perhaps, better defined by commercial and scientific factors than the production method. Examples might include stability solutions, supply chain security, turnkey consumer product options and scientific validation, among other factors." His view seems to imply that companies investing in quality research into their product, and investing their time and money, will be the ones that come out on top... no matter the production method.