Make Pycnogenol your go-to companion for a healthy voyage

Travelling opens up new horizons and brings many opportunities. It was once suggested that digitalisation would make travelling to some extent superfluous; but, very much to the contrary, air travel — both domestic and international — continues to expand at around 5% per year, according to IATA figures.

During the past six decades, international tourist travel is said to have increased 38-fold. Correspondingly, all possible efforts are being made to accommodate as many passengers in an aircraft as feasible, which consequently affects the overall travel experience.

Remaining sedentary for many hours, especially during long-haul connections, affects the blood circulation. Although the heart continues pumping oxygen-enriched blood into the arteries, the mechanisms involved in returning exhausted venous blood to the lungs is profoundly affected — because oxygen- and nutrient-depleted venous blood is transported passively upwards to the lungs via a series of vein valves in the shanks and upper legs.

While remaining seated, venous blood accumulates in veins, especially in the legs and lower limbs. Ideally, passengers should walk up and down the alley once in a while, which helps to “animate” the oxygen-depleted venous blood and promote its return to the lungs for reoxygenation.

This practice is, however, not particularly welcomed by airlines, as it affects the free movement of flight attendants and their service trolleys. Flight passengers in turn have to accommodate the consequences of sluggish blood circulation. Extended sedentary periods also cause pooling of the blood plasma in the lower extremities — to the point that gravity leads blood fluids (plasma) to accumulate in the tissues of the lower legs, calves and feet.

Those that suffer most are usually older and/or heavier than normal. With time, the tiny, particularly fragile blood capillaries in the lower legs succumb to the pressure and leak fluids into surrounding tissues of the lower legs and feet (where they remain trapped). Arriving at our destination with swollen feet that are very much resistant to being “reshoed” is a common scenario for many of us.

The importance of hydration

On long-haul flights, it is particularly important to drink sufficient water … irrespective of whether one feels thirsty or not. This precaution is so simple, though, that people tend to disregard it altogether. However, the persistent lowered pressure in the cabin causes unnoticed and accelerated water evaporation.

A close look at the back of your hands reveals the systematic drying of the skin. Even subliminal dehydration may contribute to blood thickening, which in turn increases the chances of blood cells forming loose agglomerations, which, during the flight, may clog a tiny vessel, potentially initiating a thrombotic clot.

Such clots may quickly increase in size to disrupt blood circulation, particularly in the leg veins and ankles; here, the blood flows particularly slowly, enabling platelets to interact with one another. Sitting still for hours not only results in swollen feet, it also affects the lower legs as well.

Again, walking, even for just few metres up and down the aircraft alley, will enable the blood to move upwards, alongside a series of venous valves, to return to the lungs for reoxygenation, CO2 removal and redistribution by the heart.

Arrive fit and healthy with pycnogenol

Experienced travellers take Pycnogenol, a French maritime pine bark extract, 1–2 hours prior to departure; this particular dietary supplement has repeatedly been shown in clinical trials to naturally prevent blood platelets from coagulating — a situation that could lead to thrombosis and potentially occlude a blood vessel.

Pycnogenol has a long track record of research devoted to supporting healthy blood circulation, which is based on the ability of Pycnogenol to aid constricted arteries to dilate; this improves the blood flow volume for optimal oxygen and nutrient supply to needful tissues.

At the same time, Pycnogenol renders blood platelets less “sticky,” which significantly reduces the risk of blood coagulation. The ability of Pycnogenol to “quieten” blood platelets is particularly beneficial during flights and on arrival to avoid vascular complications. Its capacity to support arterial dilation also contributes to better arterial, oxygen-rich blood flow, improving both overall fitness and wakefulness on arrival.

A fond farewell to jet lag

Travelling across several time zones can adversely affect our wake-sleep rhythm, which influences our ability to interact with other people — particularly during business meetings — and, of course, whilst on holiday. The benefits of Pycnogenol for travellers were further explored in passengers on different long-haul- flights to explore its ability to counter jet lag symptoms.

Compared with the control group, the Pycnogenol-preconditioned flight passengers experienced significantly less severe jetlag symptoms (disorientation, nausea, insomnia, irritability and disturbed sleep). Not only were the symptoms markedly reduced, they subsided much faster as well. 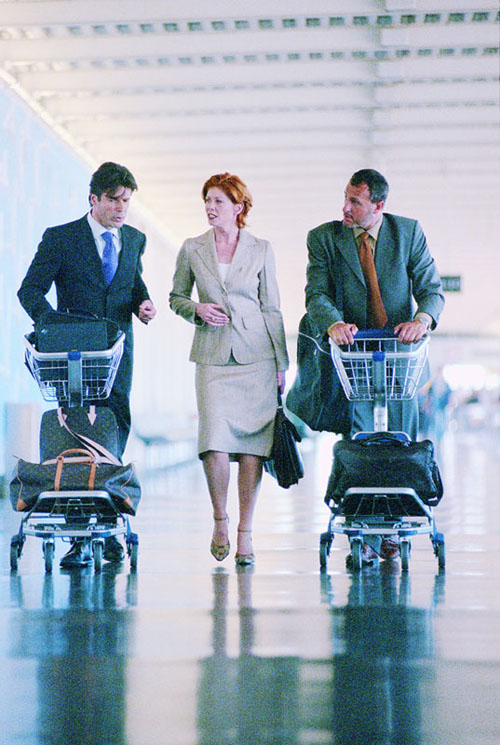 Extended sitting and the risk of thrombosis

The decelerated blood flow velocity that occurs during long-term sitting in an aircraft represents a breeding ground for blood platelets to generate clots. This environment provides an optimal environment for platelet interaction. It only takes one of the billion platelets in our blood to set off an “alarm” — possibly derived from a compromised capillary — and all the platelets in the vicinity will aggregate in an effort to seal the ruptured vessel and prevent blood loss.

Normally, however, the platelets react to a “false alarm” and, instead of sealing a ruptured leaky blood vessel, the affected vein will become clogged, effectively disrupting blood circulation.

When a blood-platelet aggregate dislodges and gets the opportunity to clog an artery serving the brain or heart, the situation may be fatal. In many cases, fortunately, such small aggregates dissociate and the passenger doesn’t actually notice anything.

Pycnogenol was previously investigated regarding its ability to safeguard flight passengers from developing foot and leg swellings and, more importantly, protecting them from thrombotic incidents.

In the study, healthy passengers travelled between London and New York, which takes approximately 7–8 hours. Pycnogenol was taken prior to departure by 94 healthy flight passengers, with another 92 equivalent passengers acting as a control group.

Passengers were screened by high-resolution ultra-sonography prior to departure and again on arrival to check for thromboses. They were instructed to drink 100–150 mL of water approximately every hour and take some physical activity (such as standing, moving their legs or walking).

The results revealed minor transient coagulations in 7% of the control group, which resolved spontaneously. The group supplemented with Pycnogenol was void of any platelet aggregations.

The placebo-treated passengers presented with an 11% increase in leg circumference, whereas Pycnogenol-supplemented travellers showed only half as much swelling.

Cabin air and risk of infection

Air transportation is said to represent a major vehicle for the rapid dissemination of communicable diseases.9 With the continuously increasing number of flight passengers, the risk for infectious disease transmission represents a significant concern.

Cabin air is filtered and recycled; however, airborne aerosols pose an infection risk. Useful suggestions for prevention comprise sitting in the front of the aircraft and the use of alcohol-based hand sanitisers as an alternative to hand washing.

The Pycnogenol taken for jet-lag and thrombosis prevention coincidentally contributes to greater protection of infections, which was identified in individuals who succumbed to a common cold. The consumption of Pycnogenol was found to reduce the symptoms and shorten the course of the cold.

The most recent and extensive exploration of air-travel-associated ailments was published this year. Participating passengers of both genders travelled in economy class for 8 hours or more twice a week. Individuals taller than 190 cm and weighing more than 90 kg were excluded.

Passengers were assigned to three risk classes: low, moderate and high; the latter group received an additional aspirin, as well as Pycnogenol. Prior to departure and on arrival, leg veins were scanned by thermography and high-resolution ultrasound; 295 passengers from initial group of 450 completed the trial.

No drop-outs occurred; however, from the initial 450 participants, many were lost owing to logistic reasons (no evaluation at destination). No side-effects or tolerability problems were observed.

A fully referenced version of this article will appear in the September/October issue of NBR.