A new clinical study has been recently published on RefluGTM Isorepair, a medical device for the treatment of gastroesophageal reflux disease developed by Giellepi Health Science 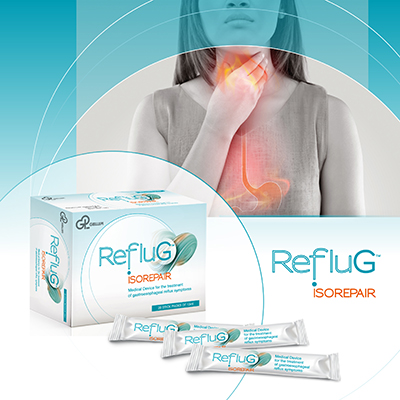 Gastroesophageal reflux disease (GERD), defined as troublesome symptoms or mucosal damage resulting from the reflux of gastric content into the esophagus, is one of the most common gastrointestinal tract disorders with an estimated prevalence higher than 21% in Europe1, 28% in USA2 and up to 33% in Asia and Middle Est2.

A clinical trial recently published in the European Journal of Gastroenterology and Hepatology4 was aimed to assess the efficacy of RefluG™ Isorepair in patients with NERD. (Ribaldone et al. 2020).

The efficacy and tolerability of RefluG™ Isorepair has been assessed in a randomized, double blind placebo-controlled trial including 40 NERD patients.

Patients were treated for 2 consecutive weeks with either placebo or RefluG™ Isorepair (3 sachets per day after main meals or before bed).

The primary outcome was to evaluate the efficacy of treatments in terms of the proportion of patients with a significant remission of NERD symptoms (heartburn and regurgitation), defined as a total symptom score (TSS) reduction of at least 3 points assessed according to the 5-point Likert scale. 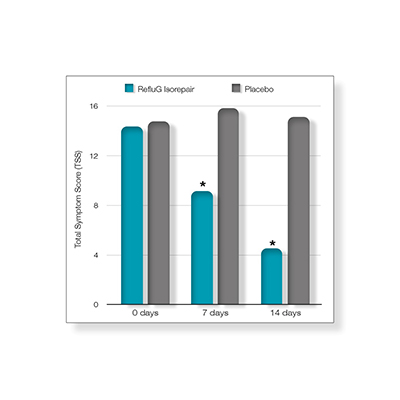 In patients taking RefluG™ Isorepair, TSS was decreased 68% at the end of the treatment vs baseline.

Overall, RefluG™ Isorepair resulted safe and well tolerated; no adverse effects were observed in either of the study groups.

In NERD patients, RefluG™ Isorepair led to a statistically significant improvement in symptoms such as heartburn and regurgitation compared to placebo. Such symptomatic benefit is likely related to the strengthening of the esophageal barrier against the damage induced by gastric contents flowed back into the esophagus during reflux episodes.

Given its mechanism of action, this product may be used alone or in combination with the current pharmacological interventions for the management of GERD.

REFLUG™ ISOREPAIR is a unique patent-pending combination in liquid sachets registered as Medical Device Class IIA in Europe. Thanks to its protective effect, the product favors the natural healing of the mucosa reducing the unpleasant symptoms associated with acid reflux.