Pycnogenol: a pioneer of age defiance

Since the 1960s, Horphag Research has blazed a trail to naturally improving age-related ailments with Pycnogenol, a standardised French maritime pine bark extract that’s manufactured to comply with strict US pharmacopoeial requirements

The ageing process often occurs unnoticed in our bodies until a certain point is reached when we realise that the pain in our hip joints no longer fades and reoccurs at regular intervals … but persists, and our formerly occasional forgetfulness has mutated into an embarrassing and permanent memory problem.

A healthy diet and regular exercise comprise the foundation stones for staying healthy longer. And, fortunately, clinical research during the past 30 years has revealed that specific dietary components may verifiably restore some age-associated impairments, both physical and mental. 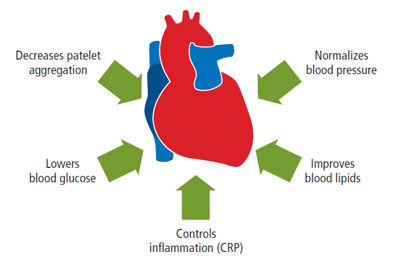 Pycnogenol acts as a catalyst in the endothelium — the tissues surrounding blood vessels — to more efficiently generate nitric oxide, an important mediator involved in relaxing the smooth muscles around the arteries. With increasing arterial relaxation, a smoother blood flow is achieved, together with a healthier blood pressure.

The normalisation of thrombocyte activity with Pycnogenol proved to protect 200 subjects from developing platelet aggregation (Figure 2).2 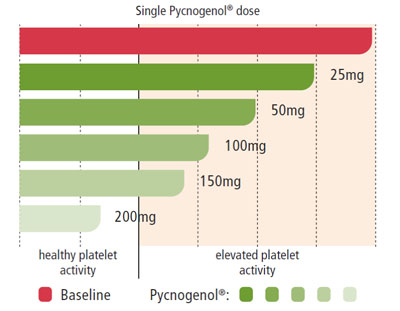 The ability to generate nitric oxide is commonly compromised in individuals as a result of excess oxidative stress, possibly derived from subliminal inflammatory processes in the body or an unhealthy lifestyle.

Because Pycnogenol improves the oxygen- and nutrient-rich blood perfusion of organs and tissues, a corresponding increase in vitality occurs. A study with athletes performing on a treadmill indicated a 21% performance increase compared with a placebo. Another study with 113 sportspeople suggested that muscle pain could be prevented by up to 75%.3

Further to its arterial benefits, Pycnogenol also significantly improves the health of veins. It has a 20-year track record of clinical research devoted specifically to vein health.4

In a total of 784 participants, Pycnogenol has been shown in 15 clinical trials to reduce swellings and improve circulation. With increasing age, our fragile blood capillaries become less able to cope with gravity; as such, watery fluids leak into the cavities or tissues of the body — mostly in the feet and lower legs — causing an oedema or swelling to occur.

Pycnogenol has repeatedly demonstrated its ability in various trials to strengthen fragile capillaries, efficiently counteracting lower limb swelling and making it a lot easier for affected people to put their shoes on!

Accelerated ageing is commonly associated with persistent, stealthy inflammatory processes and oxidative stress in the body.

Pycnogenol provides broad and significant anti-inflammatory activity and has been shown in human pharmacologic studies to significantly inhibit NF-kB activation, also known as the “master switch” for inflammation initiation (Figure 3). 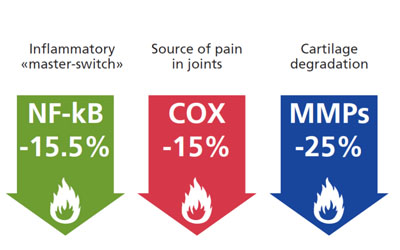 In several controlled studies, the inflammation prevention properties of Pycnogenol have been demonstrated in women in particular.5

Ladies experiencing menstrual discomfort and pain were found to significantly benefit from Pycnogenol supplementation; the results from four clinical trials reported decreased cramp-related pain and a marked reduction in the need to take analgesic medication. Furthermore, continuous daily supplementation with Pycnogenol has been credited with reducing the symptoms of endometriosis in 58 women.6

Similarly, ongoing or “smouldering” inflammatory processes persist in the “wear and tear” condition of arthritis. The inflammation causes discomfort, which is often treated with non-steroidal pain medications.

This enables better mobility … but does so at the expense of accelerating joint health deterioration. Clinical research has demonstrated that Pycnogenol metabolites specifically reach human joints, effectively arresting inflammation, the prerequisite for the recovery of cartilage integrity.7

Once consumed, Pycnogenol is processed by the gut microbiota to produce specific, bioactive metabolites that share the same distribution privileges as glucose and vitamin C in the body.

It is for this reason that Pycnogenol is so versatile and associated with so many health benefits; it reaches a vast range of organs and tissues, including the brain. Correspondingly, Pycnogenol has repeatedly demonstrated its ability to improve cognitive function in both healthy students and senior citizens.