Keeping toxins out of the supply chain

With brands in the US now claiming to be glyphosate residue free, differentiating between actual detection levels and certification requirements is critical. Dr Kevin Robinson spoke to AlgaeHealth’s Bob Capelli, EVP Global Marketing, to find out more

Algae Health Sciences (AlgaeHealth), a subsidiary of BGG, recently announced that its flagship product AstaZine Natural Astaxanthin tested 100% glyphosate-free to a level of detection ranging from less than 26–50 parts per trillion in an independent laboratory analysis.

Glyphosate, the active ingredient in the herbicide trademarked as RoundUp, is commonly used in both GMO and conventional agriculture.

The test was conducted in association with the Organic & Natural Health Association (O&N) at HRI Labs with equipment specially designed to test to infinitesimal levels of detection.

O&N chose HRI Labs because other facilities can generally only test to 20 parts per billion. “We’re very happy to have tested as “non-detected” at this extreme level of detection,” said Lixin Ding, PhD, Chief Operating Officer for AlgaeHealth. “And we’re proud to be part of O&N, an organisation that is championing the fight for a pure supply chain for the supplement industry.”

Glyphosate is becoming ubiquitous in many countries as farmers increasingly choose to grow genetically modified crops, which are designed to be used in conjunction with this herbicide. Even some organically grown crops test positive because of drifting of pesticides, the use of manure from contaminated cattle and organic farming in soil that was treated with RoundUp in the past. Unfortunately, levels in the low parts per trillion have shown potential health effects in rodents.

“A study in rats showed that glyphosate levels as low as 50 parts per trillion resulted in liver and kidney damage and indications of fatty liver disease,” said John Fagan, PhD, cofounder and CEO of HRI Labs. “I am concerned that the rapidly increasing incidence of fatty liver disease in Americans may be related to the widespread use of glyphosate. In addition, levels of glyphosate may be an indicator for risk of other contaminants.”

Speaking about the issue to Bob Capelli, EVP Global Marketing, AlgaeHealth, at Vitafoods Europe, he said: “This is a serious problem; RoundUp is being promoted and used to a large extent around the world — particularly in the US — and what’s happening is that farmers are growing genetically modified crops that are now resistant to RoundUp and, perhaps unaware of the consequences, are subjecting their entire crop to massive doses of this glyphosate-containing herbicide.”

“Huge amounts of this product are being used throughout the agricultural belt of the US and in many developing countries around the world. Now, given the fact that the nutraceutical supply chain is global, with ingredients being sourced from all over the world, it’s really important for manufacturers and suppliers to ensure that their products are glyphosate free. It’s incredibly ubiquitous … and is also extremely dangerous,” adds Bob. 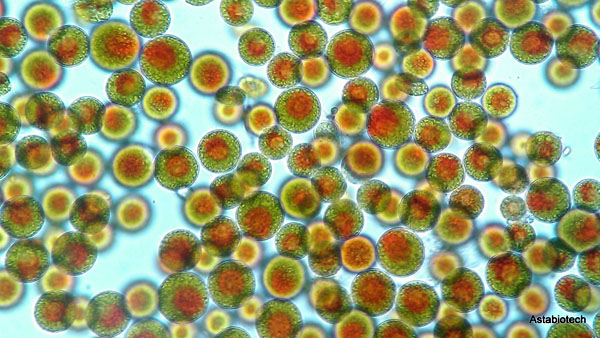 Published, peer-reviewed studies have shown that, even at 50 parts per trillion, glyphosate can damage the livers and kidneys of rodents, which is a level of detection that almost no labs can achieve. “We’re currently working with one that can, HRI Labs, because they have some very innovative ways of using their machinery. They’ve been able to test our product, AstaZine, to a level of 26 parts per trillion, which is roughly half the level that’s causing liver damage. Fortunately, no glyphosate has yet been detected in our astaxanthin product,” says Bob.

“This is not, however, an issue that’s limited to astaxanthin though and we’re encouraging all suppliers of finished products, raw materials and intermediates to check out the services that labs such as HRI can provide and get your product tested. If there’s a problem, you need to look into your supply chain and try to identify the source."

"This is a genuine health hazard that needs to be addressed; for instance, a number of researchers and scientists believe that the world’s falling fertility rates are directly related to our exposure to glyphosate.”

When asked about possible solutions, Bob admits: “Unfortunately, not even organic products are immune to the effects of glyphosate. In fact, in some cases, such as lentils, higher levels of the herbicide (up to twice as much) have been detected in organic varieties compared with their non-organic counterparts.”

“It’s a bitter pill to swallow, but until we can prevent the use of glyphosate-containing crop treatments, the only solution industry has is to test your products and ensure that what you’re putting out into the market is as safe and healthy as it can possibly be. However, most labs are testing to 10–20 parts per billion, which is just not enough; that’s 300 times higher than the levels that are causing liver damage.”

“We encourage all food and supplement manufacturers to have their products tested to the parts per trillion level to ensure that their supply chain is clean and to avoid potential consumer health issues,” he concludes.