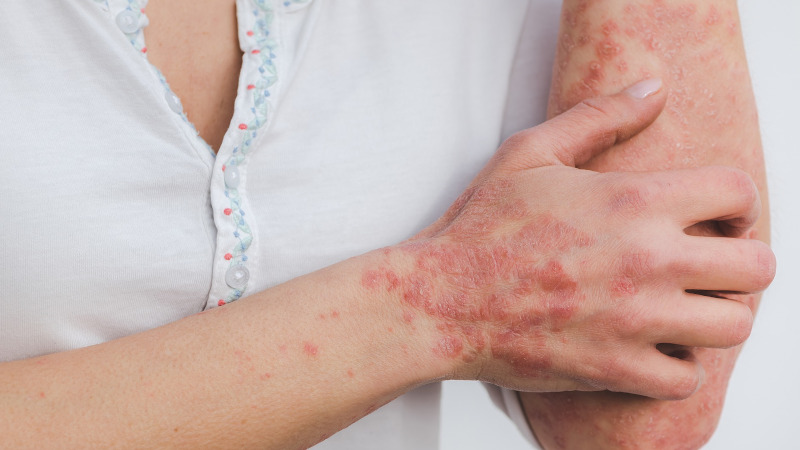 SkinBioTherapeutics has released positive results from a consumer study evaluating the effects of its AxisBiotix-Ps food supplement on sensitive skin conditions such as psoriasis.

Psoriasis is an autoimmune condition which causes skin cells to reproduce in days rather than weeks, while reducing the shedding of surface cells. This means immature skin cells are pushed to the surface, creating raised lesions which are itchy, flaky and scaley. The condition, which is affected by stress, diet, infection and temperature changes, impacts roughly 2-3% of the population according to the National Psoriasis Foundation.

The study had 267 subjects who participated from home for 56 days, with live data being provided in the form of a diary and pictures. Its goal was to use the supplement to strengthen participants’ immune systems. The supplement comprises a proprietary blend of probiotics, SkinBioTherapeutics says, and is designed to be taken daily as a single sachet dissolved in water. It’s produced by the company’s formulation and manufacturing partner, Winclove Probiotics.

During the study, participants self-reported changes to their skin across four factors: itchiness, redness, irritability, and amount of flaky patches. Across three of these parameters, redness, irritability and itchiness, over 70% of participants described an improvement in their symptoms, while 65% reported an improvement in their flaky patches. Among the participants who experienced improvements in their symptoms, approximately 60-70% experienced concurrent benefits to their energy levels, mood, and sleep.

The company aims to launch the supplement commercially in the UK, Europe and US on a subscription basis in Q4 of 2021, prioritising a reliable and consistent supply. The commercial launch will follow regulatory approval and the upscaling of manufacturing to ensure supply.

Bacteria as ingredients in skincare products: a manufacturing challenge