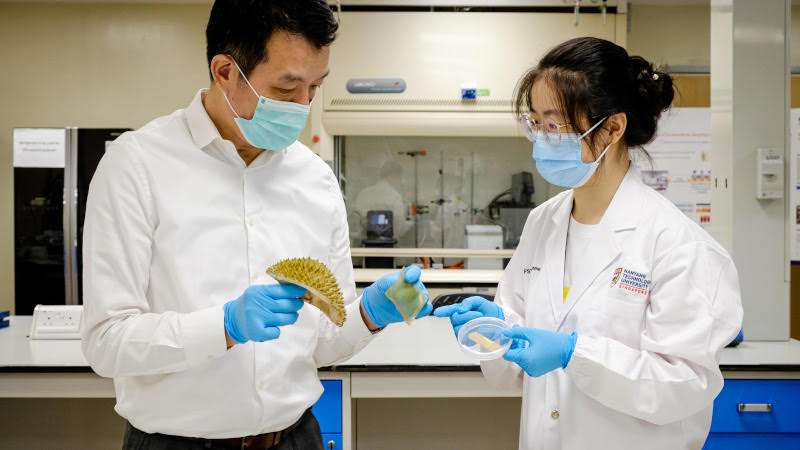 By extracting cellulose from the durian husks and combining it with glycerol (a waste by-product from the biodiesel and soap industry) NTU scientists have created a soft gel, similar to silicon sheets, which can be cut into bandages of various shapes and sizes.

They then added the organic molecules produced from baker’s yeast known as natural yeast phenolics, making the bandage deadly to bacteria.

Developed by Professor William Chen, the Director of NTU’s Food Science and Technology Programme, the innovation was published recently in ACS Sustainable Chemistry & Engineering, a peer-reviewed journal of the American Chemistry Society.

Conventional hydrogel patches are commonly available at pharmacies, usually used to cover wounds from surgery to minimise the formation of excessive scar tissue, resulting in a softer and flatter scar. The patch aims keeps the skin hydrated instead of drying up when conventional band-aid or gauze bandages are used.

Conventional hydrogel patches on the market are made from synthetic materials such as polymers like polymethacrylate and polyvinylpyrrolidine, the researchers say. Those with antimicrobial properties also use metallic compounds such as silver or copper ions. Such synthetic materials approved for use in biomedical applications are more costly as compared to the hydrogel made from natural waste materials.

“With the growing threat of antibiotic-resistant superbugs, the world will need multiple alternative ways to prevent infections. An effective way to protect open wounds is with antimicrobial bandages that are biocompatible and safe for prolonged use by humans. This is especially important for diabetic patients suffering from chronic wounds,” said Prof Chen, the Michael Fam Chair Professor in Food Science and Technology at the School of Chemical and Biomedical Engineering.

“By using waste products which are currently discarded in large quantities – durian husks and glycerol – we could turn waste into a valuable biomedical resource that can enhance the speedy recovery of wounds and to reduce chances of infections.

The husk, which comprises 60% of the durian fruit, is usually discarded and incinerated, posing an environmental issue. In Singapore, it was reported by Straits Times that 14,300 tons of durian (estimated 10 million durians) were imported and consumed in 2017.

The clinical advantage of the hydrogel bandage is that the natural yeast phenolics embedded will help to prevent the growth of bacteria such as Gram-negative E. coli and Gram-positive S. aureus. and the subsequent formation of biofilms (a layer of slime that can lead to antimicrobial resistance within a bacteria colony).

As a proof of concept, the antimicrobial hydrogels were tested as a wound dressing on animal skin and showed good antimicrobial effects for up to 48 hours, the researchers say.

The bandage is applied by simply laying it across the wound, just as with existing commercially available silicone gel sheets for wound dressing.