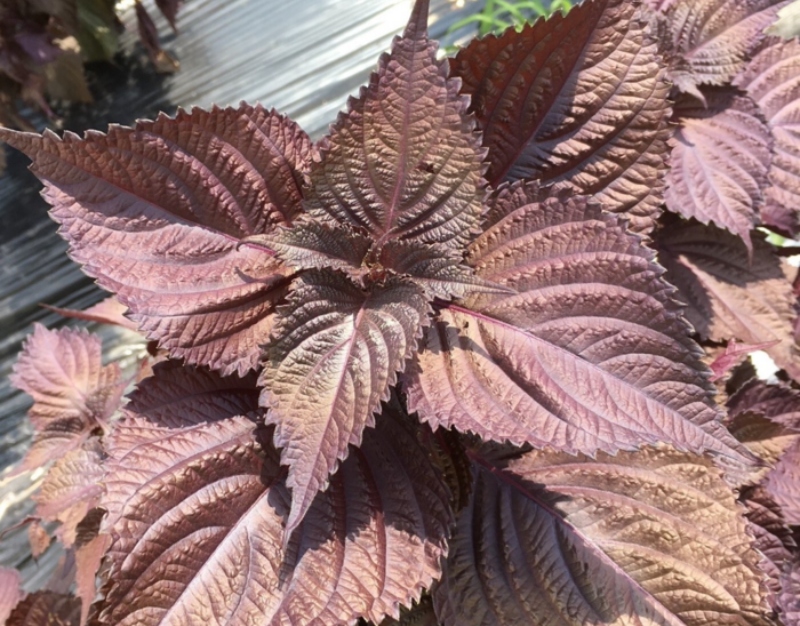 Researchers in Japan have generated a high-quality genome assembly of red perilla (Perilla frutescens), a plant most often found in Asia.

The plant is commonly known in Japan as Aka-Shiso and in Great Britain and the US as Beefsteak Plant for its dark magenta leaves. The high-quality genome assembly will allow scientists to harness the plant’s abundance of potentially useful bioactive chemicals, among which are perillaldehyde and rosmarinic acid.

Some of P. frutescens’ bioactive chemicals are thought to have medicinal properties. Rosmarinic acid is already widely in use as a supplement, with claims including anti-inflammatory, antidepressant, antifungal, and antibacterial properties, to name a few. Perillaldehyde has shown similar potential for those uses, and there is some medical evidence to back those up, despite the market for phytochemical supplements still being mostly unregulated.

The research team, led by Hidemasa Bono, professor in Hiroshima University’s Graduate School of Integrated Science for Life, recently published their findings. The high-quality genome assembly may now serve as a reference for selecting target genes for genome editing of P. frutescens, according to the paper’s authors.

The research team’s findings were published on November 16 in DNA Research.

The researchers selected P. frutescens, a member of the mint family Lamiaceae, because it is widely recognized as an important herbal plant for its unusually wide range of bioactive phytochemicals. Several enzymes for the biosynthesis of the compounds rosmarinic acid and perillaldehyde alone have been identified in the plant.

“Genome editing of red perilla for providing better traits is one of the promising ways to utilise this plant more effectively,” Bono said. “To do so, high-quality genome sequences of the target species are necessary.”

Genome editing tools such as CRISPR-Cas9 have been used to engineer biosynthetic pathways in plants, effectively recruiting the plants to produce compounds desirable in the manufacture of new and existing medications. The study authors cited another recent example of targeted gene editing, the tomato fruit, which can be recruited in this manner to produce GABA (γ-aminobutyric acid).

The researchers used Hoko-3, a specific strain of the P. frutescens. The data presented in this study shows Hoko-3 is highly genetically similar from plant to plant, in part because it is a self-fertilising crop, making it ideal as a candidate for targeted gene editing. Genetic material was taken from young hydroponically grown leaves using a Genomic-tip kit. They sequenced the DNA using PacBio's Sequel IIe sequencer multiple times and consensus building software helped them generate contiguous sequence at a very high resolution.

To annotate genes in the genome assembly, two complementary processes, each with unique strengths in sequencing, were used and the data were combined. “The number of gene models annotated in this study by combining two evidence-based annotations and the gene prediction method (BRAKER2) was 86,258, which is almost twice the previously assembled P. frutescens genome (43,527 genes) and close to the number of genes reported in another Lamiaceae tetraploid species Salvia splendens (88,489 genes),” Tamura and his co-authors wrote.

Now that the researchers have a high-quality genome assembly of Hoko-3, they can proceed with next steps toward unlocking the plant’s unique potential.

“The genome assembly and functional annotations obtained in this study will be used for mining the target genes for genome editing of red perilla,” Tamura said. “It could be possible to enhance the accumulation of valuable phytochemicals inside the plant.”