More widespread regular consumption of omega-3 supplements could save healthcare systems in the EU a total of €12.9bn a year, reports Food Supplements Europe

The objective of the Healthcare Cost Savings of Omega-3 Food Supplements in the European Union study was to determine whether cost savings could be realised, in the form of avoided healthcare-related expenditures, from the use of an omega-3 EPA+DHA supplement. The report examines the body of clinical research that tests the hypothesis that the use of omega-3 EPA+DHA supplements can potentially reduce CVD-attributed hospital utilisation costs in the European Union (EU) among those at a high risk of experiencing a costly, CVD-attributed event.

Using existing published literature and official data, researchers at Frost & Sullivan explored the financial benefits of the consumption of omega-3 EPA+DHA food supplements among people aged 55 and older. This demographic group, representing 157.6 million people or 31% of the total EU population, is considered to be at high risk of developing cardiovascular disease (CVD).

Cardiovascular disease is a set of disorders of the heart and blood vessels supplying the heart, and includes coronary heart disease and cerebrovascular disease. In general, CVD encompasses certain conditions that result from the accumulation of atherosclerotic plaques in the coronary arteries, which restricts blood flow to the heart and brain. This restriction can lead to heart failure, angina pectoris, acute myocardial infarction, other ischaemic heart diseases and sudden death. Those individuals who have suffered a CVD event and survive face a life of ischaemic heart failure, increased risk of stroke and overall lower quality of life.

Overall it is forecast that in the EU, 24% of people aged 55 and over (that is, 38.4 million people) are in danger of experiencing a CVD-attributed hospital event between 2016 and 2020. This is expected to cost as much as €1.328 trillion during this 5-year period — equivalent to €34,637 per event. However, an analysis indicates that more widespread daily consumption of 1000mg of omega-3 EPA+DHA fish oil among individuals aged 55-plus would result in more than 1.5 million fewer CVD-attributed hospital events across the EU between now and 2020, generating total cost savings of €64.5bn — or €12.9bn per annum.

Omega-3 fatty acids are a class of polyunsaturated fatty acids found primarily in marine sources (such as fish and algae) and certain plants. Two types of omega-3 fatty acids — eicosapentaenoic acid (EPA) and docosahexaenoic acid (DHA) — are exemplary of a science- and research-driven category in the food supplements area. Specifically, omega-3 EPA+DHA are among the most extensively researched ingredients in food and beverages in terms of understanding the specific health benefits for users.

Marine-based omega-3 EPA+DHAs are the primary molecules studied in the context of their potential to reduce risk factors shown to directly affect CVD risk. Moreover, there has been a significant amount of research in determining the underlying mechanism of action by which omega-3 might reduce CVD and it is likely that these compounds may have roles in regulating cell membrane properties or intracellular signal transduction.

A random-effects systematic review approach was used to infer the effect of using an omega-3 food supplement on the occurrence of a CVD attributed medical event. A literature search was conducted and 18 randomised controlled trials (RCT) were identified that tested for the presence of a relationship between omega-3 EPA+DHA use and the occurrence of a CVD event.

The study’s findings were aggregated and the expected relative risk reduction was determined and then used as an input into a theoretical economic scenario model that determined the difference in benefits and costs EU healthcare policy makers can expect if everybody in a targeted population with high CVD risk adopted an omega-3 daily. Results of this theoretical economic analysis provides insight on potential healthcare cost savings per capita and per EU country that could be realised through the targeted use of omega-3 EPA+DHA food supplements. 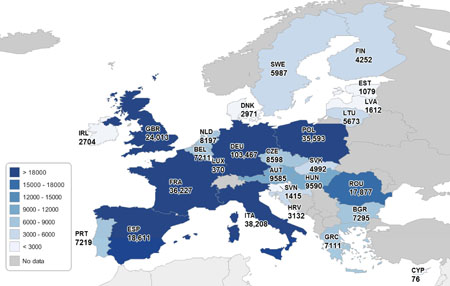 Science-based Impact of Omega-3 Use: The relative risk of an individual in the target population experiencing a CVD-attributed adverse event is reduced by 4.9% given the daily use of 1000mg of omega-3 EPA+DHA food supplements. This corresponds to more than 1.5 million avoided CVD-attributed hospital events throughout the EU during the next 5 years.

It is expected that 20% of the target population in the EU is already taking omega-3 and realising some of its potential health benefits. The report findings are the total potential economic benefits that could be realised if 100% of the EU target population used 1000mg of omega-3 EPA+DHA food supplements daily.

This analysis shows that significant healthcare cost savings can be realised through a concerted effort to identify high CVD-risk populations and motivate them to use omega-3 EPA+DHA supplements. Because a significant portion of benefits is in the form of saved consumer expenditures related to informal post-event CVD management costs such as home nurses, medical equipment for home use and lost productivity, a significant portion of economic benefits would be conferred to the final consumer of omega-3.

However, avoided CVD-event costs also leads to derived benefits to other stakeholders, such as gained tax revenue from saved productivity, which is a benefit to the government, and from lower treatment costs incurred by both public and private healthcare payers such as private insurance companies. Overall, this health-to-wealth assessment can be used by all stakeholders including consumers, healthcare providers, employers and policy makers as a means to better quantify the benefits of using omega-3 food supplements.

Food Supplements Europe Chair, Ingrid Atteryd, said: 'This healthcare cost savings study shows very clearly that billions of Euros could be saved by encouraging people aged 55-plus to use omega-3 food supplements regularly to reduce their risk of developing CVD. Communicating this message through official advice at both EU and national level, as well as via healthcare professionals and the media, could have a major positive impact on people’s well-being, while also significantly cutting the cost burden on healthcare systems and providers.'

Ms Atteryd added: 'This was an objective study, commissioned and funded by Food Supplements Europe but conducted independently by Frost & Sullivan, which autonomously developed the methodology to calculate the cost savings. It is based on official data, conducted professionally by an independent research team using rigorous methodology and analysis techniques, and carries a powerful and compelling message: omega-3 food supplements have the potential to be a real force for good.'

She concluded: 'Our chief aim is to create a more favourable regulatory and commercial environment for food supplements in the EU, by demonstrating the highly positive role they can play in promoting good health and reducing healthcare costs. This new report is a further step on that journey — and a very important one.'