The saffron stigma extract, Safr'InsideTM, a flagship ingredient of the Bordeaux-based SME Activ'Inside, which specialises in the development and production of active plant ingredients for the Health Nutrition industries, has just been granted a European patent for its leading contribution to combat stress and anxiety, and overall improve mental well-being. This patent gives Activ'Inside an exclusive right in Europe for any formulation and utilisation of the Safr’InsideTM extract relating to mood and stress regulation 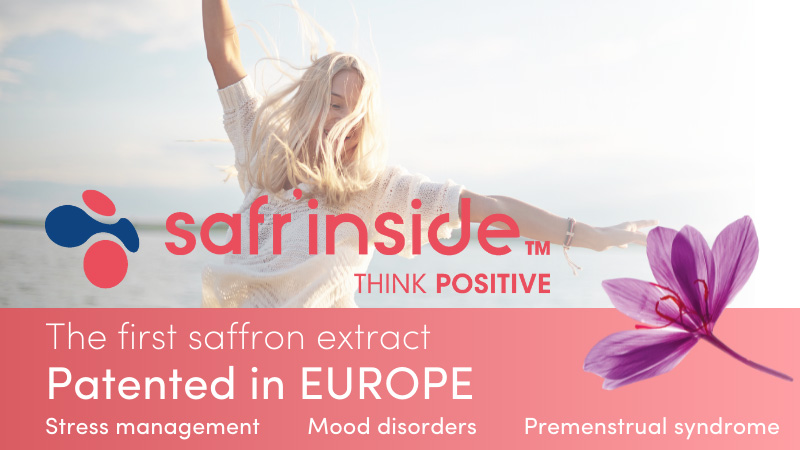 This is a new and official recognition of the effectiveness and high added value of Safr'InsideTM, the highest quality saffron extract on the market, with a safranal concentration of up to 10 times higher than that of its competitors.

This new patent is an extension to Europe of the already existing French patent for Activ'Inside. It protects the proprietary composition and exact dosage, as well as the production process and uses of Safr'InsideTM’s saffron extract, which guarantees its natural effectiveness in preventing anxiety, mood disorders and premenstrual symptoms. "We are very pleased to obtain this European patent, which further strengthens Safr'InsideTM's position at the forefront of innovative solutions for stress and mood management. It clearly reinforces our leading position in the market,” declares Benoit Lemaire, President of Activ'Inside.

Safr'InsideTM is an active ingredient composed of 100% pure saffron (Crocus sativus L.) grown in Iran, in the small village of Seno. Free from any urban pollution, it is exclusively obtained from the reddest part of the saffron stigmas, corresponding to the Sargol quality, i.e. the purest quality of saffron and the richest in active compounds. Safr'InsideTM is certified non-GMO, allergen-free and is guaranteed to be free of artificial ingredients or synthetic chemicals.

In order to combine quality and efficiency, Safr'InsideTM is derived from an extraction process that is both traditional and innovative, allowing us to obtain a standardised saffron extract with optimal concentrations of bioactives, particularly safranal. In addition, Safr'InsideTM benefits from an encapsulation technology, which protects the saffron from alterations and preserves its native composition. Consequently, this active ingredient allows us to offer the highest concentration of safranal on the market (0.2% tested by HPLC).

"Safranal and crocins, i.e. the active constituents of saffron, are respectively volatile and thermosensitive, which makes the extraction of these molecules particularly delicate. For this exact reason, Activ'Inside has developed a unique extraction process that encapsulates the saffron molecules in a matrix to prevent their volatility and protect them from heat. This non-selective process allows to preserve all the saffron molecules, and thus guarantee the full spectrum of the plant, as well as an extremely high safranal content", explained David Gaudout, Research and Innovation Director of Activ'Inside.

Even though saffron has been known for its health benefits in traditional medicine for nearly 3500 years, the high efficacy of Activ'Inside's extract is supported by two preclinical studies, and two clinical studies demonstrating a positive effect on multiple aspects of mental well-being. Moreover, a panel of 100 consumers under daily stress validated its effectiveness, which is why it is recognised today as a powerful, complete and scientifically validated cognitive ingredient. Undeniably, research has demonstrated the ability of Safr'InsideTM to act on emotional balance, to promote relaxation and to maintain a positive mood. Moreover, in 2021 Activ'Inside published the first study proving one of the mechanisms of action of the safranal-rich saffron extract on the protection of the transmission of serotonin, the happiness hormone.

"Safr'InsideTM the saffron extract richest in safranal, acts as a serotonin amplifier, which helps combat the deleterious effects of stress and naturally promotes positive mood and emotional health, all without any side effects." comments Line Pourtau, Doctor of Neuroscience. "Physical and psychological tests have shown that Safr'InsideTM improves emotional balance and social relationships, in addition to its protective effect against stress."

The new patent adds to the array of labels already earned by Safr'InsideTM - vegan, gluten-free, kosher, halal, and safety - GMO-free, nanoparticle-free – recognised and awarded by particularly accredited international bodies. More broadly, it illustrates Activ'Inside's ability to bring difference to the market with its high value-added natural solutions, supported by scientifically proven efficacy and forthright messages. In total, Activ'Inside has developed in just a few years, more than a hundred premium quality plant extracts, filed 15 patents, obtained 9 national and international awards, and is present on the European, American and Asian markets.